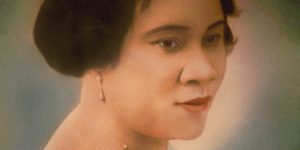 African  American beauty   entrepreneur  Madam C. J. Walker,  originally   named Sarah  Breedlove,  was born in 1867  in Delta,  Louisiana, to sharecropper parents who had recently  been  freed from slavery. Walker  experienced considerable hardship  in the  early years  of her  life. Orphaned at the  age of seven  and  obliged  to live with  her  older  sister  and  an  unkind brother-in-law, Walker  married Moses McWilliams when  she  was  14  and  lived  with  him  and  their  daughter Lelia  in Vicksburg, Mississippi, until   Moses   died  in  1888.  In  1889,  Walker  moved   to St. Louis  and, like many African American women at the time who needed to earn a living while caring  for small children, worked  as a laundress in her home.

In 1894, Walker  married John  Davis,  and  theirs  was an unhappy union that  had ended in separation by 1903. After more  than 10 years of backbreaking labor as a washerwoman, Walker  was frustrated with the lack of economic opportunity and distressed at how  stress  and  lack of proper care had  given her  short, brittle  hair, bald spots,  and a dry scalp. When relating the story of her entry  into  the hair care industry, Walker claimed  that the formula for her Wonderful Hair Grower came to her in a dream; however, it is more  likely that she got the idea for creating her own preparation after she began  working as an agent  for the Poro  company of Annie Turnbo Malone sometime in 1903. Walker  became a successful hairdresser and sales agent  in St. Louis, focusing mostly  on  using  shampoos and  scalp  salves to promote hair health, rather than selling the hair straighteners that were becoming more  popular at the time. By 1904, Walker  had  begun to produce her own products  and  sell them  in person and  by mail order. Around this  time,  Sarah  Breedlove McWilliams Davis became Madam C. J. Walker  when  she married newsman Charles Joseph  Walker.  (They  divorced in 1912.)  In 1905,  the Walkers  moved  to Denver, where  Madam Walker  expanded her  business. By 1907,  they had  moved to Pittsburgh, before  finally settling  in Indianapolis, the  city that  would  become the Madam C. J. Walker  Manufacturing Company’s permanent headquarters, in 1919.

Selling Her Own Success

Madam Walker’s  business grew  steadily  through the  1910s.  By 1911  she  had built a factory, laboratory, and salon  in Indianapolis. The  mail order  business was thriving, due  in part  to a widespread advertising campaign in African American newspapers that  appealed to  racial  pride  as well as touting the  effectiveness of the  products. Just  as important to  the  Walker  company’s success was  Madam Walker’s effectiveness at recruiting and training African American women across the United States  to do hair and  sell her products. In promotional literature and in the  lectures that  she  gave to  audiences of black  women across  the  country, Walker   emphasized her  own  humble  beginnings and  told  African  American women that  they, too, could  free themselves from  ill-paying, unsatisfying, grueling work,  and  gain financial  independence as beauticians and  saleswomen. The message  was particularly appealing to working-class black  women who  had  few employment options beyond working as laundresses or  domestic servants. As the rolls of Walker  agents  expanded, reaching 10,000 by 1916, the company built Walker  beauty schools in major  cities, provided modest insurance through the Walker    Clubs    it   sponsored, and even published a company newsletter. Around  this   time, Walker  expanded her  product line   to  include  hair   oils  designed  to straighten hair  using a  heated iron   comb. Publicly, Walker deflected African American critics  who accused her of promoting a white beauty  ideal by downplaying this growing part of her business, emphasizing instead the  effectiveness of her products in improving hair health and  her  own  contributions to the African American community as a businesswoman and  a philanthropist.

In spite of her impressive yearly sales (up to six figures by 1916), her   army   of  agents,  and   her substantial contributions to the YMCA and several African American educational institutions, Walker  had  a hard  time  initially  gaining  respect from  black  political and business leaders.  Educator Booker  T. Washington, for example,  repeatedly rebuffed  her proposals to establish a beauty  culture course of study  at the Tuskegee Institute and in other contexts expressed disapproval of the beauty  industry, going so  far as trying  to  eliminate cosmetic and  hair  product advertising from  newspapers he supported and  opposing, for a time, beauty  enterprises joining the National  Negro Business League  (NNBL). In  1912,  Madam Walker  attended the annual conference of the NNBL, and Washington, who had delivered  the keynote address and  was presiding over proceedings that  included speeches from  various successful black business owners, refused to allow her to speak. On the last day of the conference, Walker  stood up in the middle  of the audience and  told her story to  enthusiastic applause, but  it would  be several  more  years  before  Washington would  publicly  recognize Walker’s  contribution to black enterprise and the financial betterment of African American women.

In 1916, Walker  moved  to Harlem and devoted herself  to building the national reputation and cohesiveness of her business, including hosting a national Walker agent  conference in  1917,  as well as throwing herself  into  the  social,  cultural, and  political  life of black  New  York.  In these  years, Walker  became involved  in a number of social  activist  causes, joining the  National Association for the  Advancement of Colored People,  NAACP,  participating in anti-lynching campaigns, and speaking out for civil rights  during and after World War I. Walker  moved  into her  Irvington-on-Hudson mansion, Villa Lewaro, in 1918.  She  died  on  May 25, 1919,  from  a long-term kidney  illness. At her death, she was the wealthiest black woman in the  world.  Walker’s  daughter, Lelia, became president of the  Madam C. J. Walker  Manufacturing Company, which  continued to  be among the  most recognized names in the African  American beauty industry for many  decades.