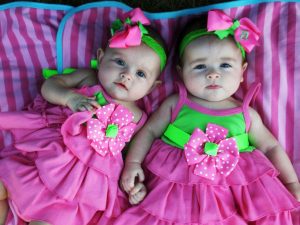 Although young  girls have long played dress up, paraded around at home in their mother’s high  heels, and  nagged  for sweets in grocery  store  check-out lines, only in the last couple of decades have they constituted a new marketing niche  known as tweens. No  longer  defined  in the  advertising world  as a child,  yet not  quite  a teenager, girls in the  8–12 age range  have captured the  attention of fashion and beauty  businesses, seeking  brand loyalty from the Y generation. Key to corporate success is the ability to sell teenage sensuality and attitude to preadolescent youth culture. Perhaps most symbolic  of this shift is the rise of Bratz dolls, a sassy, street-smart  makeover of Barbie that  embraces not the cosmopolitan lifestyle of a single girl, but  rather teenage moxie. While  Barbie has increasingly become the play toy of three  and  four  year olds, a whole  host  of manufactured teenage icons,  ranging from  Brittney  Spears  to Hannah Montana, has been  selling everything from  toys to fashion. However, tween  culture is not  simply  about marketing bliss. As this newest  stage  of the  lifecycle has  become part  of the  everyday vernacular, tweens have troubled parental and  consumer groups who  worry that  the  youngest generation may simply be growing  up too fast.

In  some  ways, selling  beauty  products and  stylish  clothes to  tweens  is not  so new.  Although unimaginable before  World  War  II, baby  boomers quickly  came into  their  own  as head-to-toe beauty  consumers, easily finding  everything from clothing stores  for  teenagers to  magazine advice  columns. By the  late  1980s,  a similar  pattern began  to take  shape  with  a somewhat younger crowd.  Shopping had  already become an all-American past time, and  suburban malls were seen  as safe and  exciting  spaces  for young  girls to pal around with their  peers  and  to try on the  latest  fashions. In the  1980s,  with conspicuous consumption no longer  a taboo, a younger generation of Madonna wannabes saw their  embracing of the material girl as a means of empowerment, at least in the  realm  of consumption. At the same time, there  were several factors  that  seemed to intensify the commercialization of childhood. Advertising to children was becoming ubiquitous; even public  schools were  no  longer  off-limits to  advertisers. New  FCC  regulations, for example,  allowed  children’s cartoons to be transformed into  advertisements designed to sell far more  than just breakfast cereal. PBS children’s programming, for example,  increasingly seemed to be teasers  for the fast food and toy industries. The  mass  marketing of Teletubbies, Strawberry Shortcake, and  the  Care  Bears paved the way for Bratz, Britney Spears, and the Backstreet Boys. In the 1990s, not only  was tween  consumption undeniable in shopping malls  across  the  country, but  market surveys  found that  tweens  had  surprising influence over  the  family expenditures, often  outspending their  teenage counterparts. Tweens were now  a marketing factor to be reckoned with and experts  in the fashion industry also relished  their  sophistication and  brand loyalty. For the children of the well-to-do, it is no longer  simply Hillary Duff but Louis Vuitton and Juicy Couture that capture their  attention.

The  commercialization of tweens, however, has  renewed fears  of exploitation. Stores  often  titillate  tweens  with  pop  aesthetics that  mix the  latest  music  with girlhood accessories that  range  from  flavored  lip gloss  to bras.  Claire’s, Justice for Girls,  and  Limited Too  have  had  huge  success, along  with  Abercrombie, a once  teenage clothing store  that  has  taken  flak for marketing thong underwear to 10 year olds. The  mixing  of Webkinz (stuffed  animals with  virtual  lives) and lingerie  has struck many  parents as disturbing. Preadolescent girls seem to have adopted more  sensual styles of beauty  and glamour associated with their teenage counterparts. They  casually  flip through the  pages  of Seventeen, once  marketed to the  age implied, and  they  follow the  romances of 20-something actors  who play  high-schoolers in  their  favorite  Disney   movies.  Some  question whether kids  are growing  up  too  quickly  thanks to Madison Avenue,  or whether this  is a recurring cliché  that  has  troubled every generation since  Vladimir  Nabokov’s 1955  novel Lolita.

Since tween  culture and consumption tend   to  be  gendered   female,   a  familiar   and often uncomfortable double standard is easily resurrected. Although  boys   are   also   part of the tween  market and are susceptible to  the  influence of the  latest  trends or  complaints about baggy pants, hair  length, and violent video games, protecting a girl’s virtue remains front  and  center of both public and  private  debates. Adding to  that  discourse are  the  latest scientific findings attempting to understand why American girls begin menstruating at increasingly younger ages. White American girls, on average, begin to menstruate at the age of 10, while for African American, girls the average age is now 9. Whether it is higher fat content in the American diet or the liberal use of hormones in dairy cattle,  girlhood seems  at risk  and  marketing to tweens  demands balancing childhood dreams with parental anxiety.

Despite a litany of concerns, marketing to tweens  has been a tremendous success, bringing billions  of dollars  to the  beauty  industry. To  understand what  appears to be a parental contradiction, scholars define  consumption as a complicated response to an ever-changing social  economic landscape. Some  have insisted that parental guilt  has  driven  the  pace  of consumption. Thanks to family speed-ups that  typically  require mothers and  fathers  to work  outside the  home for longer hours, parents turn to  shopping and  presents as a quick  fix when  they  cannot spend enough time  with their  children. At the  same  time, consumption is a process;  mothers and  daughters still  shop, get  their  hair  done, and  frequent nail salons together. Planning a birthday party at a tween  spa facilitates  familiar kinds of conversation that  in previous years helped organize a backyard get-together or sleepover. It is a shift  in labor  that  is most  profound. Mothers and  fathers  may hold  the video camera, but in the commercial setting  they do not have to provide the  entertainment or the  food  or clean  up. Again, the  growth of tween  culture is bound to larger changes in the political  economy that  also shape  the adult  world of work and responsibility. Amid a global recession, tween consumption may face some  limits, but a shrinking pocketbook does not mean  the end of tween culture. Tweens who  have  the  kind  of savvy to  distinguish between knock-off and  designer  brands will more  than likely piece together good bargains as they continue to hone their  skills in the world of consumption and style.