Pimples  or zits, as they are so commonly known, have been  considered the bane of teenage complexions since  the  early 20th  century. Whether teens  and  young adults pop them, cover them  with makeup, or use a steady stream of commercial products, much time and  money  has been  spent  trying  to reduce the appearance of blemishes. An obsession with  breakouts reflects  the  degree  to  which  acne  is associated with  unclean or impure thoughts: in the  early 20th  century, popular belief held that acne was a sign of some internal spiritual struggle or sexual immorality. This  only fueled the need to combat acne medically, because young  women were particularly concerned with their  reputations and did not want to be seen as immoral. Acne, physical  beauty, and  marriage were inextricably bound, and  girls sought treatments for acne because they feared that without clear skin they would wind up as spinsters or old maids.  Boys and  men  were also the target  of innuendos. Male acne sufferers, for example, were called pansies, and it was assumed that they  engaged in questionable activities  like masturbation. Acne,  when  not  seen as a spiritual concern, was an indicator of dirtiness, linked  with the lower classes, especially  at the  turn of the  century when  scientists and  Progressives began  to talk about germs  and  the  unsanitary conditions of the  working class. Today  it is known that  acne  is not  caused by dirt, but  rather by bacteria. However, some  of the  most  effective treatments are available  by prescription only and  can  be quite expensive. Thus, acne  can still be seen  as an affliction  of the  lower classes,  those who cannot afford the pricey treatments to attain  clear skin and are more  likely to be subjected to critiques of lifestyle.

Acne vulgaris is a skin disease  caused by overproduction of the sebaceous glands surrounding hair  follicles. There are different types  of acne  that  vary in severity, but  all acne  lesions  can  pose  problems for the  afflicted.  Acne  is most  common during adolescence, but  frequently continues into  adulthood. For  most  people acne  begins  to disappear once  they are in their  early 20s. Acne usually  forms  on the face and  upper neck,  but  the chest,  back, and  shoulders can also be affected. The  sebaceous glands  are found on the  face, neck,  back,  and  chest  and  produce sebum, which  is necessary for keeping skin  healthy. If one  of these  follicles,  or pores,  gets clogged  with  impurities or dead  skin  cells it can  lead to a buildup of sebum, which  causes  a pimple  to form.

Acne pimples come  in many  forms  and  vary according to the  severity of each case. Non-inflammatory acne is defined  as acne lesions  that  are not accompanied by redness of the  skin. The  most  common forms  of non-inflammatory acne  are blackheads and whiteheads. Blackheads are blocked pores,  which  have a dark appearance. Whiteheads appear  as small white  bumps on the  skin.  Papules are the mildest  form  of inflammatory acne  and  appear  as small pink  bumps on the skin, which  can  be  painful to  the  touch. Pustules and  nodules are  the  most  severe forms  of acne.  Pustules are small,  round lesions  that  are inflamed. Nodules are large, painful lesions  deep  within  the  skin. These will sometimes last for months and  often  harden into  cysts. Some  forms  of acne  are caused by hormone imbalances  and can be treated with hormone therapy or the birth  control pill. Periodic flare-ups of acne  in women can be traced  to hormonal imbalances as part  of the onset  of puberty, the menstal cycle, or pregnancy.

In the early 20th century, an emerging advertising industry began to target young people  with  acne,  who  were part  of a new  teenage consumer market. And  although youth have  relied  on  many  do-it-yourself remedies, over-the-counter medications became the  preferred and  most  widely  available  treatment. These treatments include the  use  of sulfur, salicylic acid, and  benzoyl  peroxide. Sulfur has been  used  in the treatment of acne  since  the 19th  century and  works  simply by absorbing excess  oil on the  skin’s surface. It is a common ingredient in facial masks  and  many  other over-the-counter treatments. Sulfur  is one  of the  mildest acne treatments, but  is not  as commonly used  as others due to its smell. Salicylic acid is a mild acid that  encourages the  shedding of dead  skin  cells. It works  well for milder  acne  by keeping pores  from  becoming clogged  and  is the  most  commonly  available  over-the-counter treatment. For  the  more  severe  cases  of acne, harsher and more  effective medications have been  sought out. In the 1920s, benzoyl peroxide began  to be used  by dermatologists and became available over the counter in the 1950s. Clearasil, a popular brand of acne medication, first appeared on  the  scene  just  as complexion-conscious baby  boomers were  coming of age in the  1950s.  Benzoyl  peroxide works  by killing  the  bacteria P. acnes that  causes outbreaks. It also  reduces the  number of blocked pores  by working as an  antiseptic. One  of the more  effective but controversial treatments is isotretinoin, sold under the brand name  Accutane. It is considered to be a last-resort treatment for patients who  have tried  everything else with  limited  or no  results. Accutane was introduced in 1982  and  continues to be a popular treatment for patients suffering from  moderate acne  to severe  nodular acne.  While  it has  been  considered a breakthrough miracle  drug  for the  treatment of acne, Accutane has been  known to cause  serious side  effects  and has  therefore remained controversial. In some cases,  the  drug  causes  a worsening of the  symptoms before  an  improvement  is seen and, in women, has been  linked  to severe birth  defects.  In some  cases, use of the drug  has been  linked  to an increased risk of depression.

Natural treatments such  as the  use  of tea tree  oil in place of the  harsher chemical, benzoyl peroxide, may be effective in some cases. Caring  for one’s overall  health is  also  recommended. This  includes drinking the recommended daily amount of  water  in  order   to flush  the  system  and  to  keep skin  moisturized. It  is  widely accepted that  the  most  effective means of combating mild to moderate acne  is to simply keep   the   skin   clean   and   to refrain   from   touching  one’s face. A lot of the greener treatments  have   become popular as a result  of a renewed focus on  natural health and  the  rejection  of harsh chemicals in beauty   rituals. These  natural remedies are often more  expensive  than the traditional treatments, and  therefore have yet to tap in to the  teenage consumer market.

There are many  popular theories as to what actually  causes  acne, but  youthful indiscretions have often  been  blamed because it tends  to peak during the teenage years. To  be sure,  these  theories have  changed over time  as part  of a constantly evolving medical, political, and cultural discourse. For example,  sexual immorality is no longer  readily linked  to poor  complexions. Instead, parents are more  likely to urge their  children to avoid eating greasy food or chocolate, thus  holding teenage self-indulgence accountable. Although this  has  been  disproven, poor  eating habits remains the most  popular explanation, blaming blemishes not  on bacteria but on the lifestyle choices of children and families. In reality, effective treatments are expensive  and  time  consuming and,  much like unnaturally white  teeth, they reveal less about the daily habits and  much more  about a segmented market that reflects  the  growing  division  between those  who  can  afford  costly  beauty  treatments and those  who cannot. 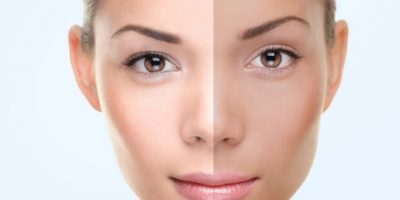