Yogacharya B.K.S. Iyengar has been treading the yogic path for over 70 years and is widely recognized as yoga’s foremost exponent. His enduring physical fitness, mental agility, and youthfulness bear witness to the benefits of yoga.

Despite his worldwide fame and increasing age, Iyengar remains undeterred from following the philosophical precepts of yoga and continues to live the simple life of a dedicated yogi. His modest and unpretentious lifestyle is exemplary to all those who seek to follow the yogic path.

In the early hours of the morning, a world-renowned yogi stirs to the pre-dawn chorus of chattering birds. At 5:30 am in Pune, India, the sun has yet to rise and the air feels fresh and cool. There are no rickshaws rattling past, no sounds of horns, and no students talking in hushed voices. Iyengar relishes the tranquillity of these first hours of the morning.

He begins the day with a bath and then, staying true to his south Indian roots, has a drink of milky coffee with sugar. This is all the sustenance that he needs to begin an hour’s practice of pranayama, the yogic art of uniting the mind and breath to release energy around the body. Iyengar stresses the importance of pranayama in the practice of yoga when he states that “the yogi’s life is not measured by the number of his days but by the number of his breaths” and that “this harmonizing of the breath is the foundation upon which the practice is based.” Dressed in a white linen tunic, he sits in the lotus position, his back straight and his barrel-sized chest expanding rhythmically as he commences the pranayama session. After the session, Iyengar spends an hour reading the newspaper to catch up on world news and enjoys another cup of coffee.

Iyengar lives with his family in a two-story house next to the Ramamani Iyengar Memorial Yoga Institute (RIMYI), named in memory of his beloved wife, Shrimati Ramamani Iyengar. The Institute bears witness to Iyengar’s standing as a world-renowned yogi: its walls are adorned with the numerous awards, citations, presentations, offerings, and works of art bestowed on Iyengar over the years, including the certificates from institutes and universities around the world.

The early morning routine of pranayama is integral to the yogic day. For Yogacharya Iyengar, pranayama is “to witness and observe the smooth flow of inhalation and exhalation” with “depth, subtlety, and precision.“

At around 9:15 am, Iyengar walks over to the RIMYI to begin his personal yoga practice. He removes and neatly folds his tunic and wrap and places the garments in a corner before selecting a mat, blanket, and a wooden block from an array of equipment. Wearing only shorts and the sacred Brahmin thread, he finds a space in the hall alongside the other yoga students, places a clock timer close to his mat, and dedicates the next two to three hours to his own practice. He begins with a supported backward bend and then removes the support and eases into an advanced backward bend. This is followed by a comprehensive program of inversions. First, Iyengar uses a curved rope suspended from the ceiling, after which he holds Sirsasana (Headstand) for 30 minutes. He finishes the inversions with 20 minutes in Sarvangasana (Shoulderstand).

In contrast to many of the students in the hall, his practice looks effortless and free, even while holding the most challenging poses, and he moves with an agility and lightness that is incredible for his age. He holds poses with the utmost concentration, stilling and quieting the senses to achieve a state of dhyana, or meditation. When asked why he remains in one posture for so long he says, “When I was young, I played. Now I stay.”

As he practices, students continue to arrive, prostrating themselves before him to show reverence for their guru. Other students from the intermediate class stop as they pass the hall to watch respectfully as the yoga master moves into another posture. His unrelenting passion for yoga is contagious and a source of inspiration throughout the Institute.

Halfway through his practice, as he emerges from a backward bend, he notices his granddaughter, Abhijata, practicing across the hall. Like many other family members, she regularly practices in the main hall. She is holding Utthita Trikonasana (Extended triangle pose). Iyengar calls her over and asks her to repeat the pose, chastising her for not fully aligning the chest and hips. He then spends a few minutes with her, continuing to guide her through several other poses. When asked about his daily rigorous yoga routine, especially impressive at his advanced age, Iyengar replies that, “If the body collapses, the mind cannot hold on. I am doing poses with sheer willpower to maintain both body and mind.” After the morning’s practice, Iyengar looks relaxed and unfazed, his eyes sparkling under the trademark bushy eyebrows. As he stops briefly to speak to the office staff, sharing a joke in Marathi with them, his contagious laugh fills the room: despite standing at just five feet tall, Iyengar commands a powerful presence in any room. Even though he receives constant unconditional adoration from all who come to learn yoga at the Institute, he manages to remain humble and true at all times to the practice of yoga.

After the morning practice, Iyengar returns to his house for a bath, after which he emerges dressed in a crisp white cotton kurta and dhoti, his white hair brushed back and a tilak (thin red stripe) running down his brow to signify it is time for the morning puja, or prayers. He sits cross-legged in front of large statues of the god Venkateshwara, better known as Balaji, and his consort, the goddess of wealth, Mahalakshmi. The idols are adorned with scented flowers and the sweet aroma of incense fills the room. He recites Sanskrit slokas, or verses, and offers scented water and sweetened milk to the gods.

After the puja, a large shell symbolizing the feet of the god Balaji is placed on the head of each member of the family as a blessing. Then, with the right hand cupped, the family each sip a spoonful of the blessed water and milk. Shortly after the morning prayers, Iyengar sits down with his family to a simple lunch consisting of a vegetable dish, rice, curds, and fruit and, at around 1:30 pm, he retires to his room for a rest. 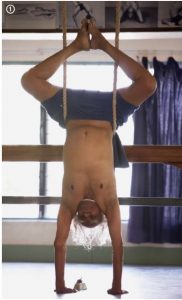 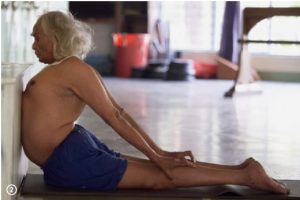 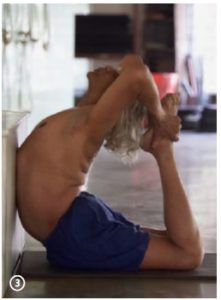 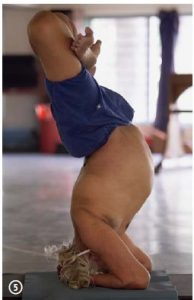 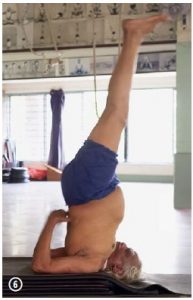 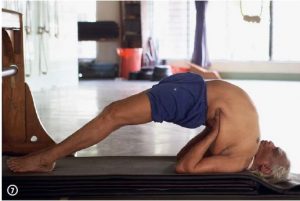 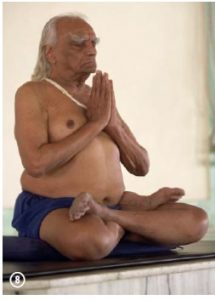 Daily practice for Yogacharya Iyengar With the timer set for 20 minutes, Iyengar uses a suspended sling to help him hold three different positions, including a variation of Adho Mukha Vrksasana, the Handstand pose (1). Using the vertical part of the stage to support the chest, Iyengar holds a variation of Bhujangasana, the Serpent pose (2). Another variation of Bhujangasana, where the head is drawn toward the feet (3). Sirsasana, the Headstand pose, known as the father of asanas (4). With graceful control, Iyengar adeptly folds his legs into Urdhva Padmasana in Sirsasana, the Lotus pose in headstand, and allows his chest to fully expand (5). Sarvangasana, the Shoulderstand pose, also known as the mother of asanas (6). Setu Bandha Sarvangasana, the Bridge pose (7). Iyengar concludes his practice with Padmasana, the Lotus pose (8).

Many devoted students voluntarily give their time and skills to the Institute. Today, two students are spending time scanning, indexing, and hence preserving the large quantity of photographs located in the Institute’s archives, a time-consuming task.

At about 4:00 pm, one of the workers at the Institute brings Iyengar his third cup of hot coffee, which he slowly sips while he makes notes on an article. Iyengar returns home at around 5:00 pm and the library closes at 5:30 pm.

Some time after 2:30 pm, Iyengar returns to the Institute to spend time working in the library, which is located in the basement. The library is long and narrow with desks running down the center. Along the walls, enclosed behind glass doors, run the shelves, which contain over 8,000 titles in several languages. The subject matter is diverse, ranging from yoga, philosophy, spirituality, and ayurveda to human anatomy and physiology and much more.

Iyengar spends the rest of the afternoon here, working at a large desk where he sorts through the stack of correspondence, much of which requires a response. He dictates his replies, which are then typed up and sent out by one of the students. The remaining time is allotted for reading, carrying out research, and receiving guests.

Several students join Iyengar in the library, quietly reading books and making notes. When a senior teacher at the Institute stops for a brief chat, the silence is broken and the students now feel free to discuss yoga sutras and yogic philosophy in hushed voices. This is also an opportunity for students to ask Iyengar any questions.

Iyengar shares his home with his children: Suchita and her family, Prashant, and Geeta. Members of his extended family also regularly visit and stay. The house, which has an old-fashioned feel, is simply furnished and feels extremely homey. At about 8:00 pm, Iyengar sits down with his family to the main meal of the day, which consists of two vegetable dishes, curds, and rice, followed by fruit. He prefers his vegetables lightly cooked and spiced, rather than raw, and if he has chapattis, he will skip the rice. Iyengar does, however, have a predilection for milky desserts.

The meal, which is prepared by his daughters Geeta and Suchita, closely follows the recommendations of the sattvic diet, which states that meals should consist of healthy, vegetarian, foods that are “pure” and wholesome. The diet is believed to provide the body with strength and energy, thus increasing vitality. Iyengar advocates eating light meals since these help prevent feelings of sluggishness, enabling the body to achieve the difficult poses. For the rest of the evening Iyengar sits with his family and together they exchange stories of their day. He watches the television news at 9 pm and then retires to his room at 10:40 pm.

This time spent with his family reflects the importance of family life to Iyengar and his devotion as a father to his five daughters and one son and grandfather to his many grandchildren. It is also clear when looking at how he spends his waking hours, that Iyengar is guided overwhelmingly by his unwavering commitment to yoga. 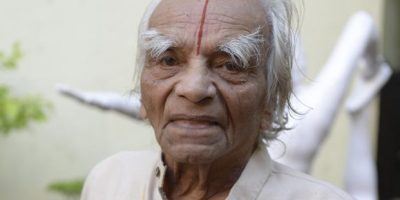 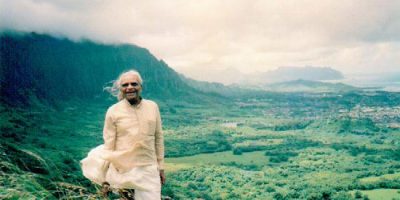